Had been thinking for almost an year of visiting this place…and like all plans this too had been postponed for a reason or another (I still have a list of places in queue now for years!).

So one Sunday of March, deciding to ignore the scorching sun, I hopped onto a local train at Howrah station.

About an hour later, the quaint station of Bandel welcomes you with shacks offering poori sabji which I ravenously gulped down. Full, I decided to proceed on foot to the famous Church of the town. But a rickshaw-puller almost pleaded me to take a ride, and unable to continue refusing his requests I got on board the three-wheeler (for a Rs.20/- ride).

The church, from the street, doesn’t give an impression of being so old and massive – courtesy to the clatter and hulla bulla of the market and bustling crowd in the vicinity. But once you enter the compound’s gate, the feel of ancient magnificence manifests itself in front of you.

Bandel Church is amongst the most splendid churches of West Bengal and is at a distance of around 40 kilometers from Kolkata. Established in 1599, it forms a memoir of Portuguese settlement in this part of India. This historical church is dedicated to Nossa Senhora do Rosario, Our Lady of the Rosary. Bandel was used as a port in the middle of 16th century by the Portuguese. The settlements of Portuguese began in the region and Christian priests, who came from Portugal, started baptizing natives. A port and a fort were built in 1579 along the bank of the Hooghly River. The Portuguese invited Augustinian Friars from Goa, and construction of the church began in 1599.

Siege of Hooghly and the miracle of the elephant:

In 1632, when Hooghly was attacked by the Mughals, the church was destroyed. Four of the five priests were killed, Fr. Joan da Cruz survived. He and a few thousands Christians were deported to the Agra Fort where emperor Shah Jahan condemned them to death by ferocious elephants. They were thrown into an arena, but instead of trampling them, one elephant lifted Fr. Joan with its trunk and placed him on his back. The elephant then went towards Shah Jahan and knelt down. Impressed and astonished by the miracle, the emperor set the prisoners free.

They were sent back to Bandel and Shah Jahan funded the reconstruction of the church and endowed 777 bighas of land for it.

Afterwards in 1660, a new church was built by Gomez de Soto over the ruins of the old one. On the eastern gate of the present Bandel Church, the keystone of the older one can still be witnessed. This old church was declared to be Minor Basilica by the Pope Leo XIII in the year 1988. In front, a huge mast of a ship stands that was presented by the captain of a vessel to the church. The ship had encountered a terrific storm during which the captain of the ship had promised to offer the main mast of the ship to the first church he sighted. The captain kept his words and the mast can still be seen in the compound.

The church comprises a number of tombstones, three altars, a shrine to Mary and an organ. As an exclusive significant religious monument of the Portuguese rule in Hooghly District, the Bandel Church brings out the glorious past of the region enriched by the Portuguese tradition and its legacy. The entrance is through an arched gateway on the banks of the Hooghly and is crowned with a statue of Mary, with baby Jesus, on a boat. After entering the church take the stairs to the top balcony where devotees light candles in front of the “Our Lady of the Happy Voyage.” The main alter houses the statue of Our Lady of Holy Rosary while the other two alters on the side contains a statue of Jesus and St. John Bosco. The interior is decorated with beautiful chandeliers. The colored glass windows and the Grand Tower Clock add to the glory of this sacred monument. The entire complex contains several statues dedicated to different Christian Saints. The complex also holds a graveyard which is visible from the balcony as well. 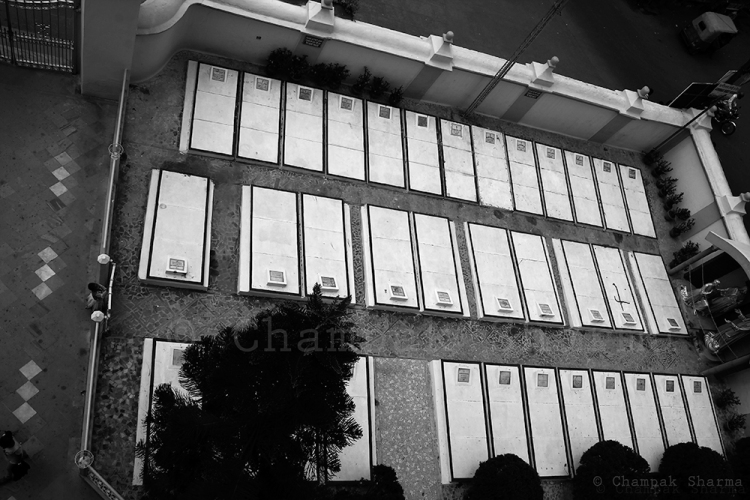 Praying for a while and clicking few photographs I came down and went to the hall where Sunday mass was about to begin. I joined the devotees on a bench, and let go off all the thoughts and worries as the mass progressed.

Energized and full of positivity I bid farewell to the church and headed for the Imambara – which means ‘the residence of the Imam’. Built in the memory of the great philanthropist Hazi Muhammad Mohsin, the imposing structure took 20 years to build and was completed in the year 1861. Along with the churches and Christian Cemeteries, this Islamic institution is also a famous landmark in the town and a must visit destination. Entry tickets are issued for a visit to the Imambara .

Designed by architect Keramtulla Khan, the two storied building is centered round a rectangular courtyard decorated with fountains and pools. But the prime attractions of the Imambara are its two 85 feet high towers. These are respectively reserved for men and women, with each tower containing a set of 152 stairs and offering spectacular views of the Hooghly river and the Jubilee Bridge. The bridge, built in 1887 on the Golden Jubilee of Queen Victoria’s reign, is one of the oldest operating rail bridges in the world. 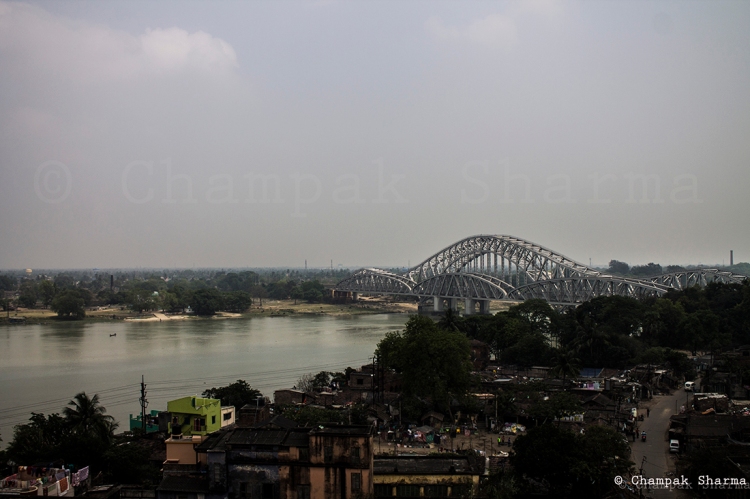 Hooghly Imambara is famous for its clock tower- the clock being bought for Rs. 11,721 (in 1852) from the manufacturer M/s Black & Hurray Co., Big Ben, London. This clock has two faces, one can be seen from the main road and the other from inside the courtyard. The clock dial has time written in Eastern Arabic-Indic numerical. It is at the middle of the twin towers constructed on the doorway of the main entrance. The clock has two dials with three bells. Smaller bells ring at an interval of 15 minutes and bigger bell rings to signify one hour.

This Imambara was originally built by a Persian merchant named Muhammad Aga Motahar in 1717. He had a flourishing salt business and with that money had built a small building. This building was just a single storied structure and this is where he stayed with his family along with his entourage of servants. 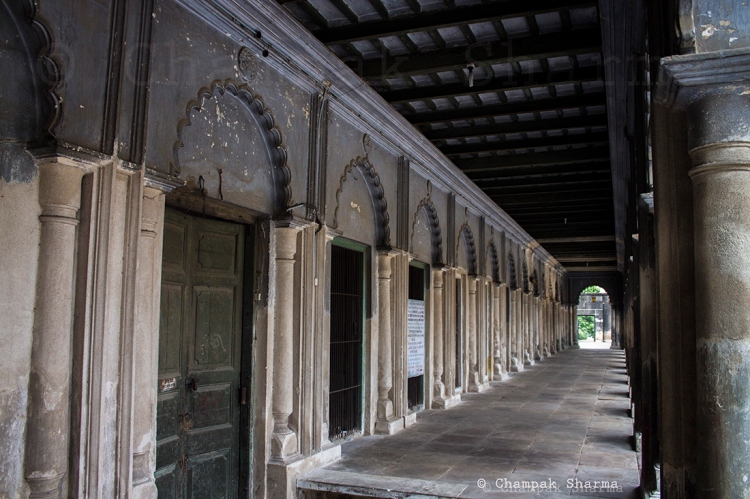 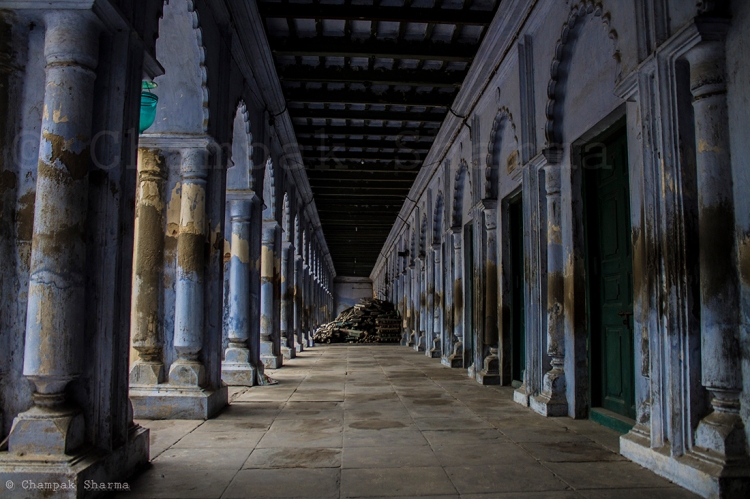 He dedicated this building in the name of “Allah” the Almighty. Further extensions to this building were done by Mirza Saleh-ud-din who was his son-in-law. This new extension was called the Tazia Khana (possibly where the Tazia is kept). 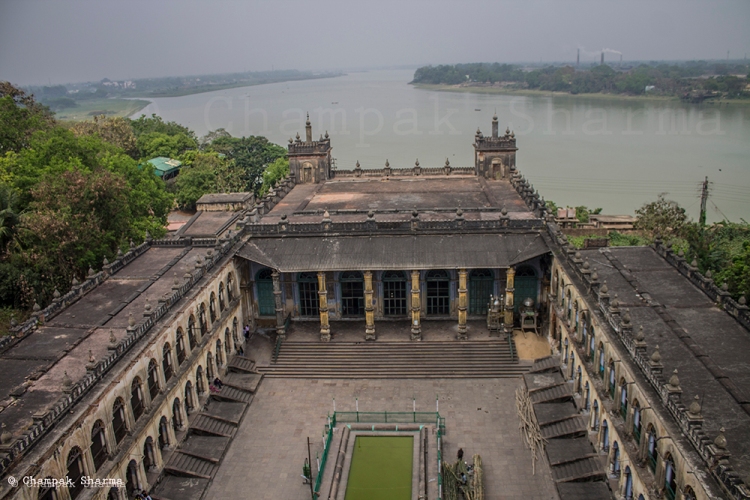 This, however, is not the Imambara that we see today, the current one was built on the ruins of the earlier, by Hazi Muhammad Mohsin. He was related to Muhammad Aga Motahar through his daughter Mannoojan Khanam. The construction was started in the year 1841 and completed in the year 1861. The cost incurred for the construction was a mammoth Rs. 2,17,413 which was a massive sum of money during that time. Once you enter the main complex you will see a gigantic courtyard with a water tank and a fountain in the center. Being an Islamic institution this is where the ritual washing is performed. On two sides you can see numerous rooms which I believe are the classrooms for the local students of the madrassa. Right in front of the courtyard is the main prayer hall which is known as Zari Dalan. The hall has beautiful black and white marble flooring resembling a chess board. The windows and sky lights too stunningly coloured glasses.

There is beautiful Islamic calligraphy with verses from Quran on the walls. Photography is not allowed inside the main prayer hall and my words would not be able to do the right justification to its beauty.

Walking towards the backyard from Zari Dalan, as we approach the Hooghly river, you can see a Sun Dial. A few meters away are dinghies (small boats) anchored at the ghat – you can take a ride on a dinghy to go close to the Jubilee bridge. I took a quick ride and it was a pleasant experience.

Immersed in the scared atmospheres of the two faiths, I wrapped up my day’s trip and started walking back towards the nearby Hooghly station.

2) Connected via both road and railways

3) Hire a cab if required

4) Local trains are the cheapest and fastest (available from Howrah and Sealdah stations). You can either get down at Bandel or Hooghly station.

1) Tourists usually go for a day trip. However, budget lodge and hotels are available in case you plan to stay.

2) Better option is to stay at Kolkata and start early morning.

You can also follow/contact me at :