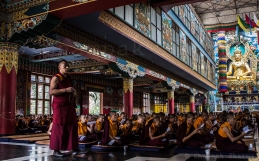 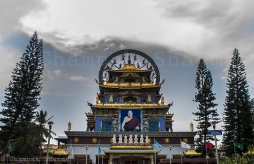 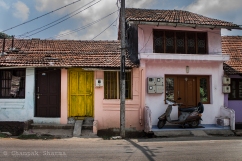 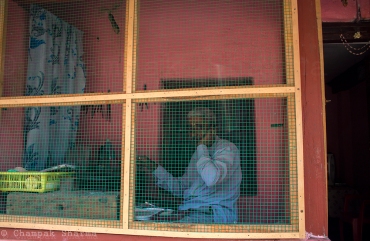 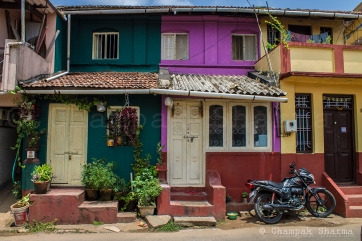 A refreshing break had been long due. Thus, without much planning I boarded a bus to Coorg, a hill station popularly known by the anglicised version of its name Kodagu. I had heard a lot about the beautiful landscape – and looked forward to the trip.

The following morning I checked into a homestay in Coorg (Madikeri)and soon went out for local sightseeing. Rows of red-tiled houses, a busy marketplace, an old fort with sprawling grounds and a pretty waterfall few kilometres away – there was a lot to discover in this quaint town. Life in Coorg had an unhurried pace, like most of the hill stations do. I blended into the mood. Next day began with a tour on foot as I walked around with my camera, clicking photographs of locales and the people. With no specific plan in mind and not much research done on must-see tourist spots – it was to be a spontaneous day for me.  Rows of vividly colored houses, colonial architecture blending with the local designs and people going about their chores with a habitual calmness – each and everything seemed to define Coorg uniquely.

I wandered leisurely for about a couple of hours, and while chatting with people at a local eatery – came across the name Bylakuppe. The bus stand was nearby and a few minutes later I had hopped onto a local bus heading towards Bangalore.

30 minutes into the journey and the conductor came to collect the fare. The Coorg restaurateur had advised me to get down at Kushalnagar and take an auto-rickshaw to Bylakuppe – I asked the conductor if that was the only option. To my delight he offered to drop me at a point (Kushalnagar would be left behind) from where Bylakuppe would be much closer by an auto rickshaw. After roughly an hour’s ride the bus dropped me at ‘nowhere’. No signboard announced the name of the place, 2-3 bamboo shacks stood there selling packets of potato chips and cookies and tea. Parked beside them were a few autos. On enquiry, I came to know that my destination was just a ride away. Without any negotiation over the trip charge quoted by the driver, I hopped onto a vehicle. It was 11.30 AM.

A narrow road led towards Bylakuppe from this place which wore the look of usual small town outskirts with no visible sign of the Tibetan culture striving a few kilometres away. Soon the gravelled path led into open landscapes with green plateaus and fields and a cool breeze brushed against my face. The familiar Tibetan prayer flags of varied colours began appearing, their numbers increasing as we moved ahead. I could see picturesque individual houses with huge compounds nestled amidst lush gardens. The scenery was gradually transforming into a beautiful postcard-like visual.

We drove past a small market like place – crowded and lively with activities. Rows of little shops were offering the famous momos and a flat noodle soup called thenthuk. In the interest of time, I decided to postpone tasting these delicacies for my return journey. Crossing the market place, we re-entered the wide landscapes – once in a while a couple of pretty cottages kept appearing in view. I was within the postcard again.

After riding for a while, our vehicle navigated a bend in the road and I spotted a bright golden pagoda at a distance. We were nearing the Golden Temple – the Namdroling Nyingmapa Monastery of Bylakuppe. The majestic monastery seemed to expand in size as we proceeded towards it. From the moment the golden pagoda was visible, I supposed the remaining distance to it to be a short. However, I soon realised that we still had some distance to go. As our auto rickshaw entered the settlement area, residences and shops sprung up. Prayer flags were all around – fluttering in front of gateways, put on bamboo poles perched on terraces, hanging from strings in the marketplace.

In a few minutes I had arrived in front of the entrance of the Namdroling Monastery. The ornate gateway had bright murals and inscriptions carved on it. It had been around three hours since breakfast and I was feeling hungry. As I stood there considering options for a lunch, I heard a harmonious drone coming from within the monastery and saw a group of tourists hastening in a certain direction which seemed to be the source of this sound. Though I was not certain what it was, I did not want to miss something which felt important. Instantly dropping the plan for snacks I swiftly followed the small crowd.

Within a small room decorated with bright frescoes sat a group of young monks dressed in maroon garbs, chanting hymns from the scriptures placed on tables in front. We, the visitors, stood near the netted windows outside the room and listened in silence to the drone of the monks’ voices. After sometime I walked towards another structure which stood a few metres away. I could see people standing in a huddle in front of what seemed like the main entrance of the building. This was another frescoed place, decorated with colourful murals and holy chants inscribed on the walls and ceiling of the verandah. I climbed the short flight of stairs and stood beside the door.

The door opened into a large hall where monks sat in rows, chanting hymns in unison. And in front were the 40 feet high golden statues of the Trinity – Guru Padmasambhava, Gautama Buddha and Buddha Amitayus. The majestic sculptures together with the scared chants and the delicate fragrance from the incense sticks seemed to fill the environment with a mystic blessedness. The monks in their maroon coloured robs sat in alignment, many of them holding booklets from which they recited the mantras. A couple of senior monks strolled around rows of disciples. As I sat beside the door, crouching amongst other visitors (entering the place during the session was not allowed), it was as if the powerful enchanting atmosphere engulfed us all. After sometime I captured a few photographs and also moved to the central doorway of the hall.

Once the prayer session was completed and the monks left, we were allowed to enter the place. I walked around, gazing at imposing statues of the Lords. Fresh flowers, incense sticks and candles decorating the altar and there were bright intricate murals on the surfaces. Adding to the splendour were the little birds flying around chirping. I took a few snaps of the grand interior and then came out, the mystic atmosphere of the prayers still lingering on my mind. I walked into the beautiful gardens surrounding the building. Tourists filled the place – some sat chatting while a few sat in silence, a bunch of them were clicking pictures of the locale. I got my photograph taken by another tourist and proceeded towards the main gate of the campus where there was a souvenir stall presided by the monks themselves.  Colourful flags, statues, trinkets and wall hangings brightened the place. I happily picked up a few packets of Wai-Wai noodles, a brand which is a personal favourite.

Then, gazing at the splendid monastery for a while, I stepped outside the gate. Back in the street, my hunger returned and I soon took a seat at a roadside eatery run by two gentle ladies. The steaming hot chicken momos could not have been better and the thentuk (pulled noodle soup) was simply heavenly!

Energized after the delicious meal, I decided to walk back my way till the bus stop. It was pleasant walking amidst the green landscape. However, I soon realised the distance was not as short as I had felt during the auto rickshaw trip. I enquired at a local household, and was directed to walk a bit ahead into a market area. Once in front of the shops, I found myself tempted again by the momos! Quickly getting a platter packed, I hopped onto an autorickshaw heading for the bus stop. And within me I carried along the blessed feeling of happiness and contentment unexplainable in words.